The Wars in Afghanistan 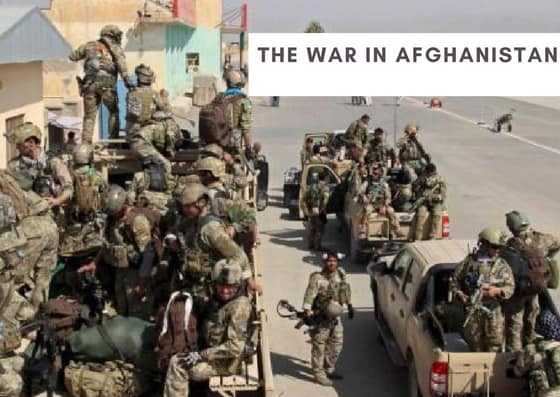 For the people who, like me, were born in the 1980s, it seems like Afghanistan has been fighting an endless war. Whilst it’s true that the country has been under a nearly constant state of conflict since the ending of the 1970s the main wars happened for a myriad of reasons. I’ll list them below and try and offer a brief explanation about them.

The actions of the People’s Democratic Party of Afghanistan, public allied to the former Soviet Union, caused people to revolt against the regime. The opposing group, the Mujahidin, fought against the violence used by the party to force their agenda on the country. As the soviets entered the conflict, supplying men and weapons, so did the USA – transforming the conflict into another piece of the Cold War that wasn’t so cold. After thousands of deaths, public pressure forced the URSS out of the war in 1989 – but not ending the conflict.

In the wake of the Soviet War president Najibullahs government tried to solve the war without the aid of the Soviet Union but was unable to do so; when the URSS was dissolved, he was left unaided both from internally and externally – which led to Najibullah’s removal from government. An interim government was established and was to be followed by general elections – as an agreement signed by all Mujahidin parties (the Peshawar Accord) with the exception of Hezb-e Islami of GulbuddinHekmatyar.

Hekmatyar didn’t want to share the government of Afghanistan with other parties; he was convinced that a coalition would not be strong enough to unite and stabilise the country. He was confident he’d be able to gain sole power of Afghanistan. After failing to gather support for his cause and to seize Kabul, Hekmatyar started bombarding the city; since the government structure wasn’t instituted yet, these attacks generated a wave of chaos. Several militias appeared, each controlling different regions of the country, and at this point the power of the central government was practically only nominal.

One of the militias that operated in Afghanistan was the Taliban. A devout group who claimed to be against warlords, the Taliban at first appeared to be a solid option for the Afghan people. However, they refused invitations to be part of the new political process and continue advancing and taking over the country. Soon, however, their extremely strict and misogynist application of the Sharia law would be cause for worry.

They were met with resistance by the Northern Alliance, led by Ahmad Shah Massoud and Abdul Rashid Dostum. Massoud had been part of the resistance against the communist government; he firmly believed in a democratic regime and arduously against the Taliban not only for their undemocratic government but also for their distortion of the Sharia law and Islam.

After the attacks of 9/11 the USA requested that Afghanistan surrender Osama bin Laden, leader of the Al-Qaeda – terrorist group who had found safe haven in the country under the Taliban. When the Taliban refused, the USA, United Kingdom and NATO launched an offensive that lasted more than ten years; they were joined by the Northern Alliance.

The Taliban was brought down from government and, despite the fact that the USA officially removed its troops in 2014, the state of war continues, with several nations still militarily present in Afghanistan. The Taliban began an insurgency to retake control over the country, and mainly operates in the south.

The war was largely criticised for it’s high number of civilian casualties during its first years; later, as the situation became more stable, the forces were redirected from combat to construction – with the foreign aid Afghanistan was able to rebuild some infrastructure, like roads, schools and hospitals. There have been talks of a peace negotiation   so it’s something to keep an eye on.